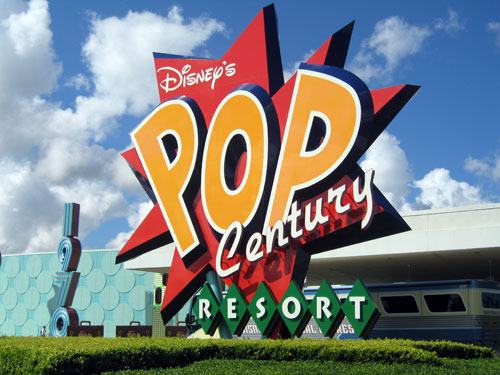 For the many people who enjoy staying at one of Disney’s Value Resorts, Disney’s Pop Century Resort is often at the top of their list.

In addition to being one of the least expensive resorts on Disney property, it is also colorful and fun.

But Pop Century has some extra special features, some of which are still unknown even to those folks who have stayed at this property.

Many things define our memory of a time period: fashion, commerce, and architecture to name a few. But one of the biggest memories we take away from an era is the music – it simply and powerfully defines our memories of a time period. Since the Pop Century is all about the time period from the 1950s to the 1990s, you can hear lots of fun music that might just take you back to a special time in your life. Here are just a few of the groovy tunes you will hear played around the resort (in their appropriate locations, of course): Jessie’s Girl by Rick Springfield, Walk Like An Egyptian by The Bangles, How Deep Is Your Love by the Bee Gees, Help by the Beatles, and You Ain’t Nothin But A Hound Dog by Elvis.

This is one of those magical Disney touches that Disney does so well. Each morning at around 8am, Disney pipes in the song “The Twist” over the sound system around Classic Hall, the main lobby, shopping, and dining area for the complex. All the Cast Members join in a dance, and many guests join in the fun. In the same way, around 6pm, Disney plays “The Hustle” and the same dancing Cast Members come to life. How fun is that?

This is a little known fact but a huge benefit of staying at Pop Century: There is dedicated bus service directly from the hotel to each of the Disney theme parks. That means faster service at the beginning and end of your day since you won’t have to wait as the bus makes stop after stop of picking up and dropping off guests at other resorts. Nice.

Disney must hire some pretty creative people to work in the restaurants at Pop Century. You can find two of the more interesting desserts on all of Disney property here – the King Cupcake (which honors Elvis with banana and bacon) and a colorful tie-died cheesecake.

Are you a fan of Disney’s Pop Century Resort?