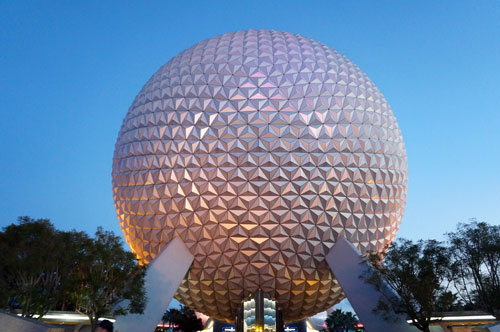 When Walt Disney dedicated Disneyland, he said that it was a place where “age can relive fond memories of the past.”  In Walt’s time, that was the turn of the century, but for Disney World guests, that’s often the 70s, 80s, or even 90s.

When Disney World Resort opened in 1971, it was cutting edge. It was the vacation spot and quickly became a favorite destination in part because of the feelings of nostalgia that it evoked as guests returned time and again with their growing families.

Now that Disney World is so gigantic and popular, guests take advantage of Disney advancements like FastPass+, Advanced Dining Reservations, and Extra Magic Hours if they want to make the most of their Disney minutes.

For a change of pace, what if we step back in time and look at Disney World as a place to be inspired by instead of a place to conquer? Let’s narrow our focus to only the things that existed when the first two parks originally opened. Let’s create a nostalgic Disney itinerary with just the classics.

Sure, it doesn’t hurt to try new things, but it’s time to reconnect with what we fell in love with about Disney in the first place.

Magic Kingdom was, first and foremost, Walt Disney’s vision. He pictured a world on the east coast where families could enjoy attractions together no matter their age and everyone would have fun. Magic Kingdom remains magical because of the original rides and shows that somehow never seem to become outdated.

First, take a stroll down Main Street USA. Keep an eye out for the Dapper Dans who will serenade you with period-appropriate tunes.

Get some souvenir shopping in at the Emporium and grab your ears at The Chapeau. Then head back to Frontierland to ride Big Thunder Mountain Railroad and to see everyone’s favorite bears in the Country Bear Jamboree. After the show, test out your skills at the Shootin’ Arcade, explore Tom Sawyer Island, and visit the Hall of Presidents and Haunted Mansion in nearby Liberty Square.

If your tummy is rumbling by now, stop by Columbia Harbour House also in Liberty Square or head back to Pecos Bill’s in Frontierland, Pinocchio Village Haus in Fantasyland, or Casey’s Corner at the end of Main Street. The food may have been updated, but the atmosphere is largely the same as it was on opening day at all of these quick-service restaurants.

Next you’re on to the Jungle Cruise, Pirates Of The Caribbean, and Swiss Family Tree House in Adventureland then over to Fantasyland for It’s a Small World, Dumbo the Flying Elephant, and Peter Pan’s Flight. Tomorrowland is next on the list with stops at Space Mountain, Tomorrowland Transit Authority PeopleMover, and The Carousel of Progress. For all of these attractions, pay special attention to the ride vehicles and the track and appreciate their feats of engineering.

For dinner, check out Cinderella’s Royal Table, Crystal Palace, Diamond Horseshoe, or Tony’s Town Square Restaurant. All of these table-service restaurants are part of the original Magic Kingdom.

At various times throughout the day, you can stop by Casey’s Corner to hear the turn-of-the-century pianist, but my favorite time to hear him is just before Wishes, which you’ll be skipping for this itinerary since it didn’t open until 2003. If you really must see Wishes though, do so from the Tomorrowland Terrace, which has a similar vibe as it did decades ago.

Epcot Center, now shortened to Epcot, opened October 1, 1982. For the most nostalgic point of view, take the monorail from the Ticket and Transportation Center to Epcot.

Let’s start in Future World. As you first enter Epcot, marvel at the gigantic structure that is Spaceship Earth. Hop on the ride if the line isn’t too long, and for the sake of the attraction, go ahead and create your future!

Next, head over to Living with the Land for a reflective boat ride through the greenhouses.

There are also a lot of throwbacks to the original Epcot if you just look for them. Innoventions West sports the original purple and blue color scheme as when the park first opened, plus you may also see some carpeted walls! Eek! Both of these themes were very popular in the 80s when Epcot opened its doors!

For lunch, we’ll be going to the Electric Umbrella or the Garden Grill. Both of these restaurants are authentically Epcot, but the food has been updated! Garden Grill has the perks of being both a character dining experience and a classically 80s rotating restaurant!

For your afternoon itinerary, World Showcase is on the agenda. World Showcase has added some country pavilions over the years, but for this plan, you’ll be visiting Canada, France, Germany, Mexico, and The American Adventure. Enjoy the attractions, the architecture, and the shopping available in these locations. Specifically, check out Voices of Liberty and shopping in Morocco, which still holds true to the traditional set-up.

For dinner, you’ll be stopping by Biergarten in Germany or La Hacienda de San Angel in Mexico, both of which welcomed guests on opening day. Like the other restaurants, the food has changed, but the atmosphere is totally nostalgic!

At dusk, you’ll be finishing your evening with Illuminations: Reflections of Earth. With an opening day of January 30th, 1988, this is pushing the envelope on our nostalgic Disney tour, but it’s close enough. The show has changed quite a bit over the years, but imagine what a spectacle this would have been in the late 80s!

On your way out for the day, stop by the Camera Center. They won’t be selling film for your Polaroid, but you can still get 35mm film and newer technology like SD cards. You can also check out your PhotoPass photos here and buy some cool frames. If you’re really feeling like a throwback, stop here on your way in and buy a couple disposable cameras! Don’t forget to pose for a picture outside where you can still see the original “Camera Center” signs.

With all of this time travel park hopping business, you’re going to need a place to rest your head. When Walt Disney World Resort opened to the public in 1971, there were only three hotels to choose from, and they weren’t sorted into Value, Moderate, and Deluxe categories. Disney’s Contemporary Resort Hotel, Disney’s Polynesian Resort, and Disney’s Fort Wilderness Resort and Campground were your options.

The Contemporary, which is situated just across the street from Magic Kingdom, is a classic. It was certainly “contemporary” in the 70s, and some of those original designs can still be seen in the hotel. The Contemporary is known for its geometric shapes popular in days gone by. Even the shape of the building pays homage to the “future” decade. The monorail remains the same, and you can even see the original globe street lights lining the path. For souvenirs, stop by Bayview Gifts or Fantasia Market, which still has the old lighting and low ceilings. Here you’ll find adult beverages, snacks, and magazines for your poolside enjoyment. Don’t forget to check out the rooftop balcony, which is now part of the California Grill. This is a great place to catch the Electric Water Pageant, which premiered on October 25th, 1971 as part of Dedication Day.

The Poly, as it’s come to be known, holds on to that old South Pacific vibe with original walking trails and gas tiki torches. The Moana Mercantile sells old school sundries and souvenirs, and even though the resort has seen a recent makeover, it was restored to its original name: Disney’s Polynesian Village Resort.

Fort Wilderness was one of the most popular resorts because it also offered a campground area where guests could pitch a tent or use their own camper. There is plenty to do including the Tri-Circle D Horse Ranch where guests can try out horseback riding. You can also canoe, kayak, bike, play tennis, and learn archery. Also unique to Fort Wilderness is the steam-powered railroad that opened in 1973 with the purpose of transporting guests to and from their campsites to the lodge and to River Country water park. Although the railway is now closed, you can still see some sections of track on the outer rim of the campground. Finally, you can round out your evening with a visit to the Hoop Dee Doo Musical Revue dinner show. This was Disney’s way of keeping guests on property rather than leaving the resort to find food. It was meant to be temporary, but it was so popular that the Cast Members decided to stick around and keep it running.

Do you a favorite nostalgic Disney World offering?