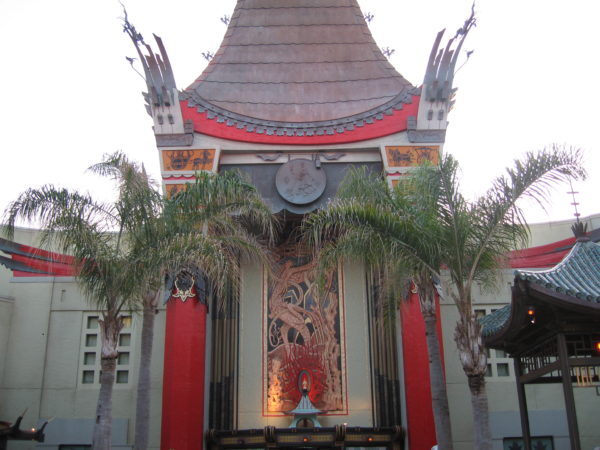 On April 30th, Disney’s Hollywood Studios debuted a brand new nighttime show called Wonderful World of Animation. I was there, and I was thrilled to share the experience live with all of you.

Wonderful World of Animation is a heart-warming tale of how Disney animation progressed throughout the years. While it is a very abridged version, it includes clips of every Disney and Pixar animated film ever created.

The show arrived on the eve of Disney’s Hollywood Studios’ 30th anniversary, which was celebrated on May 1st. It takes place on the Chinese Theater and is a show that can only take place at The Studios. Disney says it’s a kind of love letter to Disney animation.

The show starts with an old-fashioned Grauman’s Chinese Theater and announcer introducing Mickey, who appears front and center. Mickey then rises literally to the top of the theater as he transforms into his role in Fantasia; this is also a figurative move because Fantasia rose him to fame. Sorcerer Mickey uses his magic to bring other Disney movies about. These movies seem to flow from Mickey’s fingertips! First, the theater transforms into the Cave of Wonders from Aladdin. What follows is a celebration of movies old and new- Frozen, Cinderella, Coco, Lilo and Stitch, Nemo, and inside out. The narrator proclaims, “Nothing is more important than family.”

Next is Incredibles, Zootopia, Lightening McQueen and Tow Mater from Cars, Winnie the Pooh, and Buzz Lightyear. The Theater then becomes a storybook with pages flipping down while we transition to the “love” theme including Sleeping Beauty, The Little Mermaid kissing her prince in the boat, Beauty and the Beast, Celia Mae and Mike from Monster’s Inc., and 101 Dalmatians. The narrator says, “I just love happy endings!”

A good story isn’t all friendship and love, though. Disney’s Villains are just as much a part of the story as are the good guys! Tamatoa (the crab from Moana), The Cheshire Cat, Hades, Bruce the Shark from Nemo, Captain Hook, and other bad guys and gals also make appearances.

But Friendship always wins! Wreck it Ralph, Joy from Inside Out, Snow White and the Seven Dwarfs, Baymax, Ariel and Sebastian, and of course the gang from Toy Story all make an appearance. You’ll also see Moana, Anna and Elsa from Frozen, Lightening McQueen, Tarzan, The Lion King, Robin Hood, and more.

It should come as no surprise that the show ends with a recording of Walt saying, “I only hope that we never lose sight of one thing: that it was all started by a mouse.” Mickey returns and says, “Gee, thanks, everybody! It sure has been a whole lot of fun!” He also declares that this is only the beginning. The Mickey Mouse Club theme song plays, and Mickey says, “See ya real soon!” Mickey then leaves on a red carpet.

The Wonderful World of Animation uses projection mapping to totally transform the Chinese Theater into the scenes from the movies, and it’s a magical journey through 90 years of Disney animation. With themes of magic, family, adventure, romance, villainry, and friendhip and catchy tunes, this show will soon become a favorite!

The Disney Parks Live Entertainment division has been working on the the show for months including testing it after park closing to make sure that the audio, video, lighting, music, and special effects were perfect. I think they achieved their goal!

Happy that Wonderful World of Animation highlights all Disney animation?