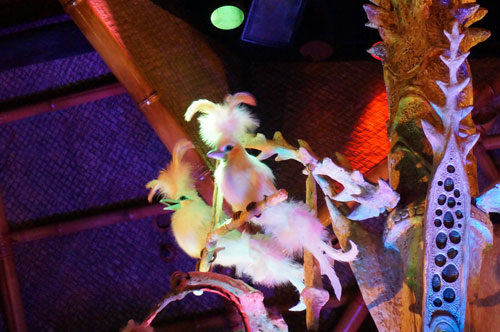 A Fun Look Back at Walt Disney’s Enchanted Tiki Room

The Tiki Room was the first Disney attraction to use audio-animatronic characters when it opened in 1963. The combination of high technology and Polynesian culture, which was very trendy at the time, made the attraction an instant hit.

Disney had originally planned for the Tiki Room to be a dinner show where the birds sang songs as guests dined. The flowers located in the center of the room were originally intended to house a coffee station.

At Walt Disney World, the attraction was in operation on opening day in 1971. It was nearly identical to the version in Disneyland. However, 1998 Disney replace the original show with a new on called “The Enchanted Tiki Room (Under New Management).” That show featured Iago from Aladdin and Zazu from The Lion King.

A small fire in January 2011 badly damaged the Iago figure. Disney took the opportunity to restore the attraction to its original state. It once again is very similar to the Disneyland show.

During the show 150 different characters come to life including birds, flowers, drummers, and totem poles. They sing a number of songs including the catchy and classic Sherman Brothers song “The Tiki Tiki Tiki Room” as well as the 1932 song “Let’s All Sing Like the Birdies Sing” by Hargreaves, Damerell, and Evans.

Thurl Ravenscroft, a voice actor who provide the voice for Kellogg’s Tony the Tiger (“They’re grrreat!”), provide the voice of Fritz the German parrot. Ravenscroft also worked on many other Disney projects including The Haunted Mansion, The Country Bear Jamboree, and The Pirates Of The Caribbean.