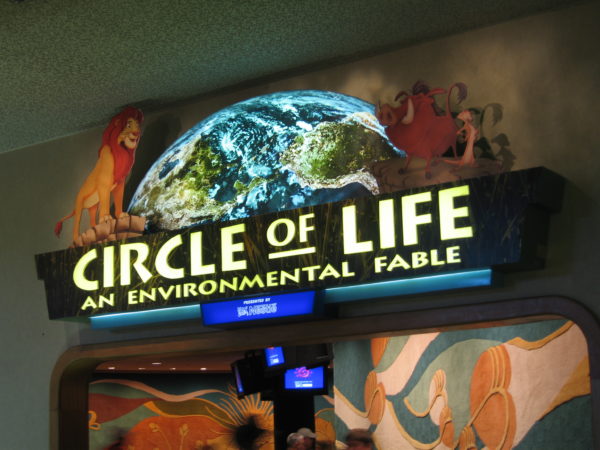 Circle of Life An Environmental Fable at The Land

By now, you’ve hopefully settled into the new year and are no longer writing 2018 and scratching it out in favor of 2019.

I thought it would be a good time to take a look back at 2018. Disney World is quickly approaching its 50th anniversary, which will officially happen on October 1st, 2021. With 50 magical enhancement promised for this remarkable date, there have been some casualties this year to make way for those things.

The Old World of Disney Store

World of Disney in Disney Springs saw a massive renovation throughout all of 2018. The largest Disney Store in the world no longer has the large Disney characters and primary colors that were popular in the 1990s. The new store is modern, streamlined, technical, and much easier to navigate.

The Circle of Life: An Environmental Fable

The Circle of Life opened in January, 1995 and closed on February 3rd, 2018. The theater in Epcot Future World’s The Land pavilion that was used to teach guests about saving the environment is now used for special events with no replacement planned as of yet – at least not one that we know of.

Pirates Of The Caribbean is a central attraction in Magic Kingdom’s Adventureland, but the red head auction was removed during a month long refurbishment from February 26th, 2018 to March 19th, 2018. Instead of the red head herself being for sale, she is now a pirate selling goods that she stole from the townspeople.

Sweet Spells, a candy and sweets store in Disney’s Hollywood Studios, closed on April 15th, 2018 and reopened on Memorial Day weekend as a merchandise location for Toy Story Land.

It’s a well-known fact that Disney characters don’t talk during meet and greets. However, Mickey defied all odds when he found his voice in 2011. Through the magic of Disney, Mickey started interacting with guests at Magic Kingdom’s Town Square Theater. While Mickey still meets and greets his adoring fans at this location, he went silent one again on May 13th, 2018.

Since 2002, Jack Sparrow’s Pirate Tutorial has been teaching young guests the finer points of being a pirate in Magic Kingdom’s Adventureland. The attraction closed on September 29th, and no plan to reopen it has been announced.

Disney’s Caribbean Beach Resort saw a refurbishment in 2018 as it gave part of its property to the planned Disney’s Riviera Resort. One casualty of this refurbishment was Shutters Restaurant which was “shuttered” throughout the makeover and reopened as Sebastian’s Bistro with a brand new menu.

Move It! Shake It! Dance & Play It! Street Party

Magic Kingdom’s parade, Move It! Shake It! Dance & Play It! Street Party, which started in 2014, ended on December 1st, 2018. While we’ve been without a parade for more than a month, the new version, called Move It! Shake It! MouskeDance It! Will open on January 18th, 2019 as part of Mickey’s 90th Birthday Celebration.

Some may not consider Artist Point a loss in 2018, but others were pretty sad about the change that the restaurant faced. Artist Point, at Disney’s Wilderness Lodge, used to be a quiet and serene signature dining restaurant; starting on December 16th, 2018, the service was changed to a character dining meal with Snow White, Dopey, Grumpy, and the Evil Queen.

Did something close in Disney World in 2018 that you miss?