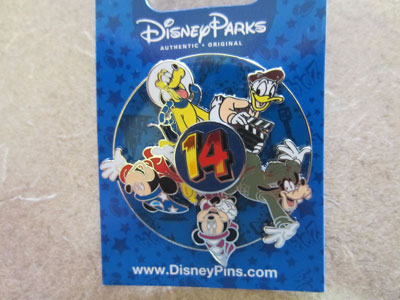 Each year, Disney brings out merchandise branded with the current year, which is called the Disney “Dated Art Program.” In this case, we mean “dated” in the sense that it has a date printed on it, not “dated” as in out-of-date.

Many people enjoy purchasing these dated souvenirs so that they have a special memory of the particular year they visited Walt Disney World.

In early 2013, as part of the Limited Time Magic promotion, Disney allowed the public to vote on several different artwork designs for 2014. According to an announcement by the Disney park blog in late 2013, the overwhelming winner was a Mary Blair-inspired Disney castle design. Personally, that is the one I liked too.

Want to win a 2014 Disney Trading Pin?
Check out the entry instructions at the end of this article.

By the way, Mary Blair is a Disney Legend and was responsible for the unique look of the art that inspired It’s A Small World and the huge mosaics inside Disney’s Contemporary Resort.

Now Disney has released plenty of merchandise with the year “2014” printed on it and incorporating the new design graphics.

Let’s take a look at some of the Dated Art stuff you can buy now:

Would you like to win a 2014 Disney trading pin?

To win, just send an e-mail to me at [Contest is over – Congratulations to the winner, Lori from Florida!]. I’ll add you to our mailing list (if you aren’t already on it) and enter you into the drawing. One lucky winner will get this 2014 Disney trading pin. I’ll select one recipient on or around February 28, 2014. I’ll request your mailing address and then send the prize to you. It’s that easy! This give-away is open to everyone, everywhere.

Would you like to win a 2014 Disney trading pin?