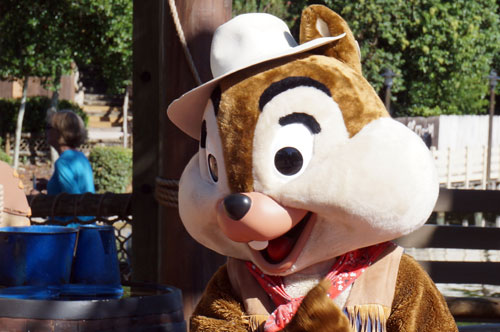 Magic Kingdom is the original park in Walt Disney World. It is everything that dreams are made of, and it was the last park that Walt had a hand in building. Sadly, he never saw it finished.

The park has so many special touches that the other parks just don’t have. It isn’t called the Magic Kingdom for nothing!

Among other things, Magic Kingdom has more character meet & greets than any other location at the Walt Disney World Resort. Let’s see who you can meet there!

As soon as you walk under the Walt Disney World Railroad trestle, you’ll enter into a world that is reminiscent of days gone by: Town Square and Main Street USA. In the middle of Town Square, you’ll see a flagpole and usually a crowd of people. These people are waiting to meet everyone’s favorite Disney dog: Pluto!

Since this is the first character that guests see, the lines can get pretty long but the Cast Members are good at keeping the line moving.

If you happen to be visiting during Christmastime, you may see different characters.

Off to the right, you’ll see Town Square Theater, which houses a meet & greet for Tinker Bell and Mickey Mouse himself. This is not a two for one deal though; each character has its own line with separate wait times and FastPasses. However, you really only need a FastPass+ for Mickey. Why? Because he talks! It’s the only place in Disney World that guests can actually interact with the Main Mouse!

Snow White is occasionally hanging out outside of the theater on the porch. She isn’t there all the time, so check your times guide or the MyDisneyExperience app for details.

Also in Town Square is a small courtyard outside of City Hall. Here, you can meet Aurora. During Christmastime, Santa Claus and Santa Goofy are also there.

After checking out the characters in Town Square, enjoy a stroll down Main Street USA. You might even catch some townspeople along the way.

At the end of Main Street, you’ll find Casey’s Corner. Hanging out across from the restaurant, you’ll find Mary Poppins. If you’re lucky, you may even see her friend, Bert!

Princess Fairytale Hall is a great place to meet some of your favorite princesses. It’s the equivalent to Epcot Character Spot. The Hall is divided into two sections: one for Anna and Elsa and the other for Cinderella and Rapunzel. Both wait times are pretty long, but they’ve gotten Anna and Elsa’s down a bit from where it was when the sisters first arrived. Each section has a FP+, and I would recommend taking advantage of this service if they’re on your list.

In Fantasyland‘s Enchanted Forest, you’ll find a character meet & greet that is an attraction in itself. Ariel’s Grotto is themed just for her! She normally has a very short wait time, so she likes to take her time with children.

Located just behind Seven Dwarfs Mine Train, this area can get pretty busy. Ariel does offer a FastPass, but the line isn’t usually very long so I wouldn’t waste your FP.

Pete’s Silly Side Show is kind of hidden in the circus area of Fantasyland, so a lot of people don’t find it easily. If you have young children or you just want some unique interaction with the classic characters, this is the place to be!

There are two sides. The first is for the ladies: Minnie Magnifique and Madame Daisy Fortuna. The guys are on the other side: The Amazing Donaldo and the Great Goofini. Since this character meet and greet is sort of a diamond in the rough with four characters for two waits, the lines are usually pretty reasonable, too!

Meet Mr. Self-Confidence outside his tavern in Fantasyland. This very funny and unique character will have you in stitches. You’ll have to take his jokes with a grain of salt, though, especially if you’re a woman. True to his character, he’s a bit (read: a lot) of a chauvinist. He’s the guy we all love to hate, but he keeps the crowds entertained with his antics!

Don’t be late if you want to meet Alice in Wonderland, the White Rabbit, and even the Mad Hatter near the Mad Tea Party across from Cosmic Ray’s Starlight Café. It seems that everyone is celebrating their un-birthday because the lines get very long for this fun trio.

Outside of Peter Pan’s flight, you can meet the boy who never grew up and his friend Wendy. Like the ride, the lines can get pretty long, but it’s worth the wait! Pan is quite a guy!

Along the right side of the castle tucked cozily away in the greenery, you’ll find one of the bravest Disney Princesses: Merida! She might even teach you some archery! It’s a quick lesson (especially if the lines are long), but it’s a great way to keep kids entertained in line!

Meet Winnie the Pooh and Tigger too in the Hundred Acre Wood. These playful characters love to make new friends, so bounce on by for a picture and a hug!

Hidden at the exit of Buzz Lightyear’s Space Ranger Spin, you’ll find the friendly astronaut himself a few feet from the ride and across from the Tomorrowland Transit Authority PeopleMover. Buzz doesn’t appear in many places, so this is a unique opportunity. Plus, he’s rather large and expressive, so kids and adults alike will get a kick out of him. The best part is the line (if there even is one) is pretty short.

Deep in Adventureland, you’ll find Agrabah and a very adventurous couple: Aladdin and Jasmine. After you ride the Magic Carpets, visit them just across the way. They’ll be there waiting to hear stories of your adventures! Don’t forget to grab a Dole Whip on your way out!

Rivers of America in Frontierland is the home of the Liberty Square Riverboat and also provides access to Tom Sawyer Island via raft. At the pier in front of the river, you’ll find the fun-loving chipmunk brothers Chip & Dale. This is a two-for-one location because you get two characters for one wait time!

You’ll find them near the churro stand and the Diamond Horseshoe. They’re not always there, but if you look for a PhotoPass Photographer standing by him or herself, there’s a good chance the guys will show up soon. They come from behind Splash Mountain, so you might even see then walking to their meet & greet location! There’s hardly ever a line, so step right up and snap a picture while you can!

Also in Frontierland just outside of the exit of Splash Mountain, you can meet Jessie and Woody from the Toy Story series. They’re super friendly and always willing to offer a handshake!

Do you enjoy meeting characters in Magic Kingdom?